The national heat power industry has traditionally used pulse-controlled constant-speed actuators (with a controller generating “higher” (H) or “lower” (L) signals) in automatic control systems of power plants. However, recent trends have been toward using analog-controlled actuators with positioning function (positioners), popular in the West.

It is of interest for distributed-control system experts at thermal power plants (TPP) to compare both types of actuators to make an optimal design decision based on technical considerations rather than subjective preferences.

Such a comparative analysis is our goal here. For correct comparison, we will consider general industrial positioners with constant speed motors.

The alternative with positioning (Fig. 1 b ) requires the analog setpoint Xsp to be converted into a sequence of switchings of the motor in the appropriate direction.

Actually, the approaches differ by where this unavoidable conversion is done: 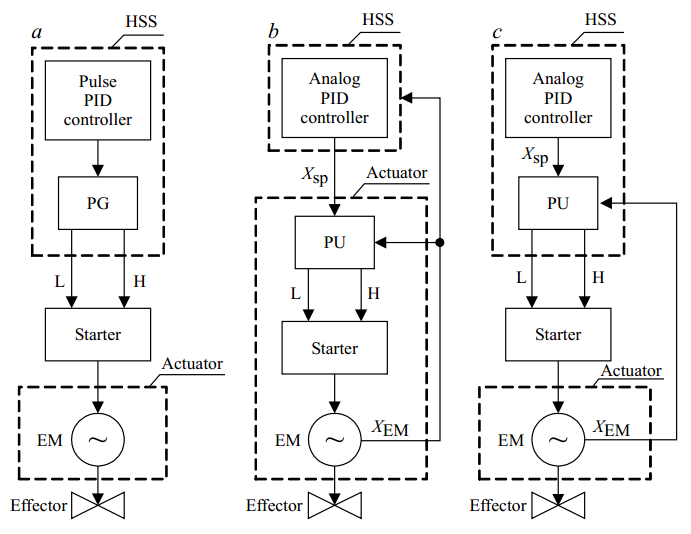 Thus, a pulse-controlled actuator is a very simple and, hence, cheaper device. In the control system, an analog con-trol is converted into a pulse control by a special software of the hardware-and-software system (HSS). It is clear that the capabilities of the HSS are considerably superior to those of the microcontroller built in the positioner.

Accuracy of Positioning the Actuator. For a pulse-con-trolled actuator, it is necessary to ensure the minimum pulse width Tmin. If pulses are too short, the motor only heats up, failing to move. In [1], it is required that the minimum width of the pulses supplied by the pulse-relay controller to the ac-tuator must vary from 0.125 to 3 sec with an increment of no greater than 0.1 sec. In our opinion, it makes no sense to limit the range of Tmin because the state-of-the-art instrumentation allows this parameter to take any value greater than its minimum allowable for the effector. The minimum pulse width should be configured when adjusting the automatic control system, i.e., should be selected by the set-up operator. This would cover almost all variations of electric drives used in heat power engineering and allow determining Tmin with adequate accuracy.

The only way to improve the accuracy of control in this case is to reduce either the speed of the servomotor or the error of the control pulse width.

An important characteristic of the HSS is the accuracy of the response of the process interface unit to the pulse generated by the controller. In [1], this parameter is not defined. In the pulse-controlled actuator, the accuracy of the control pulse depends on the execute cycle of the program that generates the pulse. If the control program in the HSS is executed for 0.1 sec (typical for the majority of HSSs), then the execute cycle of the pulse-generation program must be much shorter (about 10 msec). Otherwise, there will be con-siderable degradation of control accuracy. The analog control of the positioner will be more accurate if the cycle time of the built-in controller is shorter than in the HSS, which is quite expectable. The response accuracy of positioners is better than that of pulse-controlled actuators.

There is another limitation for pulse-controlled actuators: the controller must operate no more than five to six times per minute. Otherwise, the actuator and effector are subject to rapid wear.

For a constant-speed positioner, it is necessary to set the minimum pulse width, i.e., to prohibit a new setpoint for the positioner if it is insignificantly different from the previous one. The number of switchings of such actuators is also lim-ited (for example, no more than five to six switchings per minute for AUMA MATIC positioners). To meet these two requirements, it is necessary to introduce a setpoint aperture for the positioner: the controller generates a new position setpoint for the actuator only if it is different from the previ-ous one by more than the aperture. This increases the positioning error for the actuator. The position sensor of the positioner has some error and play, which increases the control error too.

Thus, the accuracy of positioners can hardly be increased compared with pulse-controlled actuators.

A possible solution is to use positioners with variable-speed servomotor, but they are much more expensive.

The errors due to the plays and rundown of the actuator can quite easily be compensated programmatically in the HSS. This could be done in the controllers of positioners, but the manufacturers of general industrial positioners have not provided such an option.

The error of the starter amounts to tens of milliseconds. For example, if the starter is controlled by AC pulses, then its error varies from 30 to 80 msec. This instability is because the leading and trailing edges of a pulse fall on different points of the sinusoid.

Accuracy of Dynamic Control. When changing over from continuous-time control to discrete-time control, the accuracy of implementing the control action degrades and depends on the cycle time of the controller. Pulse-controlled actuators have no control-performance advantages over constant-speed servo positioners. The control performance can somewhat be improved by using the Tustin substitution rather than the Euler substitution. Even then, both types of actuators will be equivalent. In this case, however, the controller for the positioner has a positioning unit as an additional dynamic component, which reduces the control performance.

A variable-speed servo positioner could improve the control performance, but, as already mentioned, actuators of this type are much more expensive.

Pulse-controlled actuators are operated by the following sig-nals from the HSS: two signals DI (“Not open” and “Not closed”); two signals DO (“H” and “L”); one signal AI (“Actuator position”). The wiring and connection layout are simple because discrete signals are resistant to interference. The input analog signal is a feedback indicator. Overall, the control circuit is simple and reliable. The program unit of the controller is somewhat more complicated because it involves analog-to-pulse conversion (see [2]). Upon loss and recovery of power supply to the controller, the position of the actuator does not change.

Positioners are operated by the following signals from the HSS: two signals DI (“Not open” and “Not closed”); one signal AI (“Actuator position”); one signal AO (“Actuator position setpoint”). Unlike the pulse-controlled actuator, the control circuit for the positioner is more temperamental and less reliable because of the analog control. A more expensive shielded conductor is required. The program unit of the controller is simpler. The presence of the built-in controller in the actuator does not make the control by the HSS unnecessary-the HSS controls the extreme positions of the actuator and provides the setpoint aperture. Upon loss of power supply to the controller, old positioners usually close the effector. Upon loss of setpoint signal, modern positioners keep the last position. There is a problem, however: in restoring power supply to the controller, it is necessary to recover its setpoint output for the actuator position. This can be done, but not very easily because the controller has been de-ener-gized for some time. The last position of the actuator has to be stored somewhere.

None of the two actuators can be preferred because both have some advantages and disadvantages in terms of control circuit, layout, and setup.

Reliability. Positioners have built-in starter and controller and operate in dusty and moist environments at variable temperature and are subject to intensive vibration. The starter and controller of pulse-controlled actuators usually operate indoor, in relatively better conditions. Although time-to-failure data for these two types of actuators are unavailable, pulse-controlled actuators are expected to be more reliable.

In recent years, manufacturers of process equipment (boilers, turbines, generators, mills, burners, pumps, fans, valves, actuators, etc.) have tended to deliver it completely with control means. This results in a conglomerate of various control systems with different hardware, software, interfaces, and protocols at the plant and complicates the setup and operation of the DCS. If it is some specific equipment (such as the vibration and mechanical monitoring system, the electrics of the turbine control system), then such an approach is justified. In many cases, however, there is no need to deliver monitoring and control means completely with equipment because the HSS can perform their functions. There are other accompanying disadvantages (not related to the topic being discussed) that may provoke human errors, such as different color designs of video frames by dif-ferent companies and different units of measurement of, for example, pressure. Basing control systems on diverse hard-ware and software raises the cost of the DCS.

In summary, it should be pointed out that it is not manda-tory to buy a positioner to create an automatic control system based on the principle of constant-speed positioning. Such a system can be implemented by the HSS (Fig. 1c), which is much cheaper.

For automatic control systems of TPPs, positioners have no significant advantages in terms of control circuit, connection layout, setup, and control accuracy over pulse-controlled actuators, but are more expensive and, apparently, less reliable.